People consume content differently on different platforms. The variation is due in part to the nature of the platforms and the characteristics of the people they attract. And users often change their engagement with social media from app to app. For example, here are different ways people tend to engage with various platforms:

Getting a feel for those nuances can make your approaches more tailored and more effective.

Below, in this 2019 Pew report, you can see the relationships between various social-media platforms and the news-consuming public. 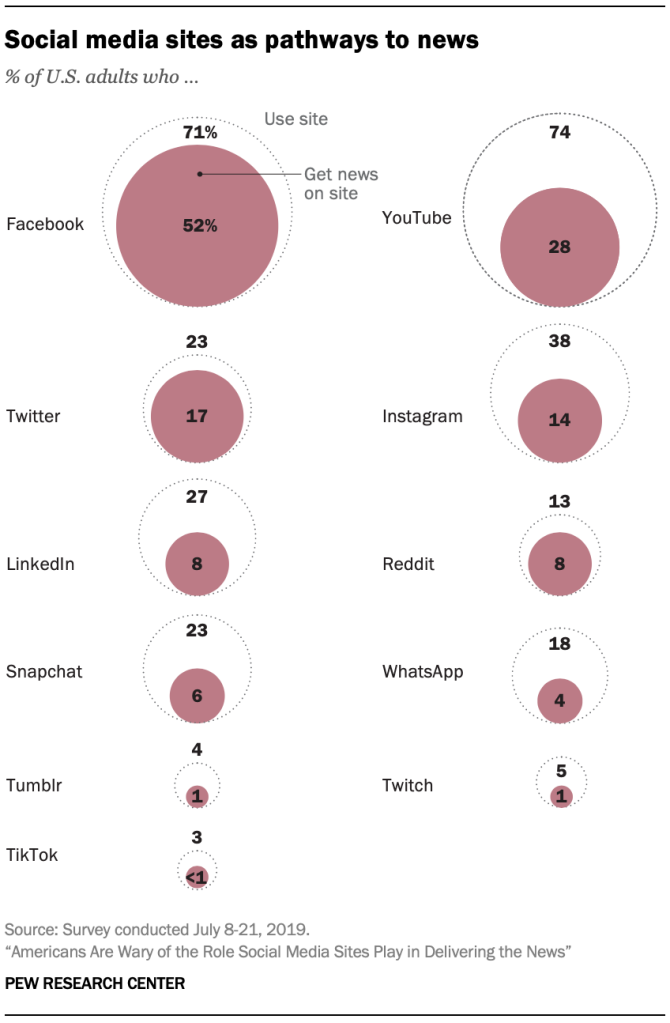 Jessica Hubbard manages social media at Science, which publishes journalism as well as content for research journals. She crafts what she posts to match the dynamics of each platform and its audience:

Social-Media Platforms: What to Know

Each platform has its own culture, its own jargon, its own audience. Here’s a primer:

The behemoth, Facebook has the largest and broadest user base. It’s your high-school prom date, your mom’s cousin, your former colleague, your best friend – all mixed together with brands, media companies, and people you’ve never met. Meanwhile, about half of American adults get their news through Facebook, according to Pew Research.

You may be able to find stories based on the conversations happening on Facebook. For example, BuzzFeed used the Facebook-owned tool CrowdTangle to find and analyze misinformation relating to the Australia bushfires.

Another way to use Facebook is by creating a Facebook Group. PBS NewsHour, for example, has the Science Squad Group, and Vox used a group is to find sources to talk about Obamacare. These will require more moderation than a standard page, so think about what you hope to get from a group before investing the time in building one.

Ways of surfacing these communities include:

Other products within Facebook include Watch (the video player), Marketplace (local classifieds) and Messenger (1:1 messaging, which also exists as a stand-alone mobile app).

Facebook was once a huge traffic driver to publishers, but a January 2018 algorithm change to put a higher priority on “meaningful social interactions” led to a dramatic drop in Facebook referrals. As a result, many news organizations no longer see as much success posting stories, although this decline was not universal.

A common sentiment is that Facebook is now pay-to-play, and you will have to boost posts or otherwise use paid advertising to reach even your own followers.

Quick and short, this “newsiest” of the social-media apps is a natural home for breaking news and live events. Twitter is populated with “power users” and active subcommunities, such as journalists, academics, and activists.

The main feed can be organized two ways: algorithmically (“Home”) and chronologically (“Latest”).

Hashtags are useful for amplifying the reach of a tweets, although you want to be discerning when using them — #don’t #hashtag #every #word.

There are tools for finding popular hashtags (Sprout Social has a roundup), but if you’re looking to gain traction in a specific niche, following chatty users in that space is a great way to discover them.

A few hashtags that will help direct you to active voices:

Two other Twitter accounts of note: @Also_AScientist and @culturedish, which can lead you to specific scientists, science communicators, and science journalists outside of the stereotypical image of “who a scientist is.”

Aesthetically pleasing and smoothly designed, Instagram (owned by Facebook) is an image-driven platform, usually with an aspirational or escapist quality to the content. Well-composed photography mingles with beautiful illustrations and celebrity-sponsored content. The platform tends to attract a younger audience.

Hashtags are a valuable tool for making Instagram posts more discoverable, as further described in Hootsuite’s guide to Instagram hashtags.

Instagram is not generally a huge traffic driver — it’s hard to link back from within the feed, and you need to either reach 10,0000 followers or get verified in order to link back through Stories.

However, for organizations that can regularly post engaging images, there is long-term brand-building potential with younger audiences. In a version of Social-media Inception, Adriana Lacy, of the Los Angeles Times, took to Twitter to discuss using Instagram for habit formation:

At times, Instagram can veer from its escapist culture and see content on political and social justice become much more widespread, such as when Black Lives Matter activists turned to the platform as an educational and organizing tool.

The self-described “front page of the internet,” Reddit hosts a collection of dedicated communities (“subreddits”) dedicated to particular topics. Users comment on and “upvote” particular posts; highly engaged posts can end up on the front page of Reddit, causing traffic spikes. Many subreddits also host “Ask Me Anything” (AMA) sessions.

There are many communities dedicated to science, including: r/science (large community dedicated to research published in the previous six months) and r/everythingscience (smaller associated sub to r/science). There are also subreddits dedicated to specific disciplines, regions, hobbies and so on.

However, Reddit is a particularly particular culture, with various rules and standards of etiquette. The key is being an engaged participant; it is generally bad form to post links to your stories on Reddit. To that end, always contact the moderators and ask for permission before posting on a subreddit. Each one has its own rules and conventions. One subreddit told me that if I ever posted any Knowable content, then any link from our domain — no matter who posted it — would be banned.

You know it as a site primarily for professional networking and recruiting. As such, it could be a good home for publishers with business or industry coverage.

Different types of profiles include Company Page (good for the main brand); Showcase Page (for a sub-brand or subsidiary); and personal profiles (for individuals).

Individual people’s profiles can be influential, so consider building up “thought leaders” within your organization as part of your LinkedIn strategy.

Some publications have success with pitching the LinkedIn editors directly to get more highly featured. Given the nature of the platform, workplace and career stories may find a receptive home here.

Both a beautiful bookmarker and a powerful search platform, Pinterest is beloved by moms, do-it-yourselfers, and hobbyists of all sorts.

“Pinboards” are used to save and discover content from around the web. Users will “pin” a link to their own boards. There is a powerful search function for serving up other pins. Users can also follow other boards, which show up on the algorithmically populated feed.

Classic content examples include DIY projects, design, cooking, and wedding planning. But anything people are passionate about or have hobbies around is fodder for Pinboards. That can include a lot of science material.

You may want to consider including “pinnable” content, such as infographics that can be pinned directly from your site. See Hubspot’s guide to optimizing pins .

If educators or science teachers are part of your core audience, Pinterest could be an effective tool for reaching them. A 2018 survey found that 73 percent of educators reported using the platform.

You might consider maintaining a pinboard yourself, with keyword-rich pins that can seed others’ boards.

The new kid on the block, this app features vertically shot videos that are often meme-y and addictive. Think dancers, lip-syncing, and a brand of comedy specific to Gen Z.

Few publishers are on here. One that is: The Washington Post, which uses the platform to provide a humanizing look into its newsroom and encourage awareness among younger potential audiences.

Read more: “How The Washington Post uses TikTok to engage with its audience,” by Katie Pellico, CNN Business.

The original ephemeral-content app, Snapchat is known for short, vertically shot videos that disappear after 24 hours.

Snapchat remains popular among teenage users, but publishers have not gotten traction. Those who partner with the platform can produce original programming available on the “Discover” tab. But if you are a “user,” it is difficult for potential users to find and follow you. If you seek to build a younger audience with ephemeral content, Instagram may be a better bet.

Once a mainstay of every nerd’s content diet, Tumblr is a microblogging site featuring a smorgasbord of images, diaries and fan fiction. It’s also a site in decline.

Tumblr used to have devoted science communities. But usage in general has fallen in recent years, particularly after an explicit-content ban was put in place, so it has become uncommon for publishers to devote energies there.

The “university” in your pocket that can settle a spirited debate with a few keywords or send you down rabbit holes for hours on end.

Although this is not a “social-media platform” per se (RIP, Google Plus), Google and other search engines remain an important traffic source for publishers. Besides the standard search-engine result page (SERP), your content can show up on a number of Google products, including Google News. The Google News Initiative provides an overview of their offerings.

Search-engine optimization is a complex endeavor. Here are a few tips to get you started:

Embracing humor and being conversational are considered good practices. But how will that work for your publication? Brandon Echter, audience-engagement editor at Snopes.com, specializes in honing social-media voice. The following conversation with him has been edited and condensed for clarity.

What’s the connection between the content and the social-media voice?

Content 100-percent informs your voice. While people do contain multitudes and oftentimes do switch between “Here is my serious voice” and “Here’s me joking around,” if your content is more serious or more jokey, that’s going to inform who you are on social media, because that sets the tone.

How do you come up with a brand role or a social-media persona?

We answer a bunch of questions: If this publication was a person, what would that fictional person be? Where would they hang out? What would they like to do?

Who should be involved in developing the brand voice?

Brand role is very much a collective, and you do need to have everybody’s input there. That persona will probably be somewhere in between all of those people’s ideas of what the brand is. It is really helpful to do activities like this as a group — but individually. Everyone writes their own answers to the questions, and then you all combine and see where this person is.

Do you have any examples of places that you think have a real well-developed voice?

On the more serious side, ProPublica (@propublica) has done a really good job of using things like Twitter threads to tell narratives and speak from its own serious, storytelling voice.

Watch More: Be Human — Breathing Life Into Your Social Media: A talk Echter gave for The Communications Network: